With the release of the Los Angeles Dodgers 2020 regular season schedule, their Opening Day matchup is now set as they will face the San Francisco Giants at Dodger Stadium on Thursday, March 26, when all 30 clubs will be in action.

Though for the Dodgers and Giants, their series includes an off day Friday before resuming with games on Saturday and Sunday. After a three-game set against the Colorado Rockies, the Dodgers embark on their first road trip of the season for a rematch with the Giants and to face the St. Louis Cardinals.

Per tradition, the Dodgers will be at Dodger Stadium on Jackie Robinson Day (April 15), when they play the Cardinals in the second of a three-game series. 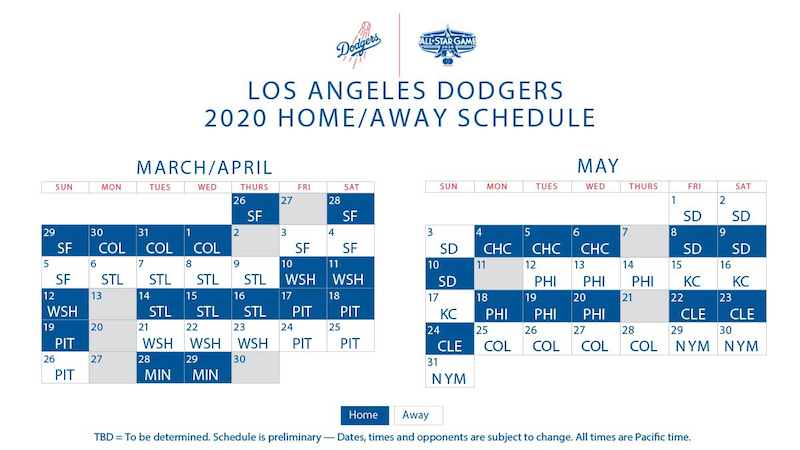 That comes during what’s the longest homestand of the season, spanning nine games from April 10-19. The Dodgers’ longest road trip is 10 games, from July 24-Aug. 2, and includes series with the Miami Marlins, Minnesota Twins and Arizona Diamondbacks.

Interleague play for the 2020 season pits the National League West against the American League Central. As such, the Dodgers host the Twins (April 28-29) in what’s their first Interleague matchup of the year.

They additionally will welcome the Cleveland Indians (May 22-24) and Detroit Tigers (June 19-21) to Dodger Stadium during the 2020 season. 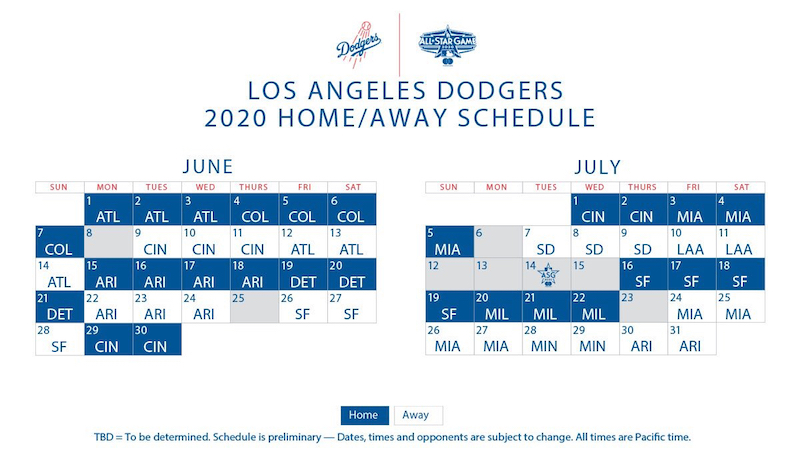 The annual Freeway Series will be played July 10-11 at Angel Stadium, and shift to Chavez Ravine for two more games on Aug. 25-26. The 2020 season will mark the first time Interleague prime rivals play one another in the same market during the weekend heading into the All-Star Game. 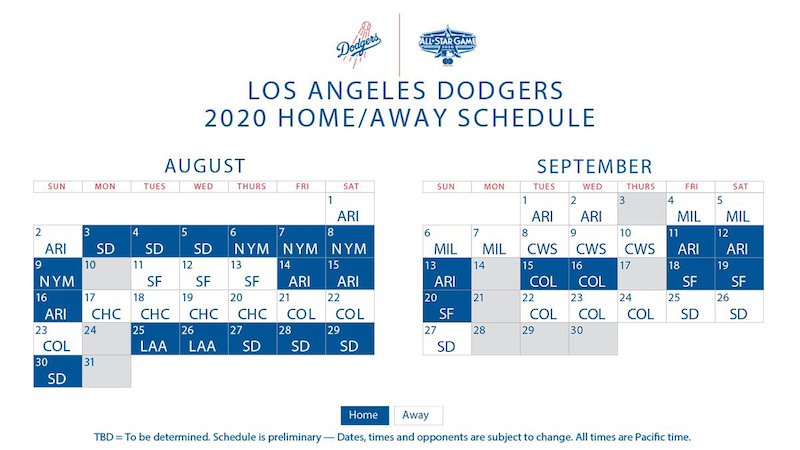 That of course is being hosted by the Dodgers, and will be played Tuesday, July 14. It’s the first time Dodger Stadium has served as the backdrop for the Midsummer Classic since 1980.

As for the conclusion of the 2020 season, the Dodgers finish with a six-game road trip to face the Rockies and San Diego Padres. The final day of the regular season — Sunday, Sept. 27 — features 12 divisional matchups across baseball.

With less than a month until the scheduled start of Spring Training, Major League…