The Los Angeles Dodgers dropped the first game of their final regular-season series at home, and now will spend the weekend playing under the shadow of Vin Scully Weekend. While the three-day stretch comes with mixed emotions, the Dodgers have done their best to ensure it’s a celebration of Scully.

Friday’s game is preceded by an on-field ceremony that’s scheduled to begin at 6:30 p.m. PT. Dodger Stadium auto gates open at 4:10 p.m., stadium gates at 4:40 p.m., and fans are encouraged to arrive early. The ceremony will begin with a video tribute narrated by Bob Costas.

The on-field celebration of Scully’s career will be emceed by Dodgers broadcaster Charley Steiner. Hall of Famer Jaime Jarrín, Dodgers chairman Mark Walter and Hall of Famer Sandy Koufax are among those who will speak.

Scully will be joined on field by his wife, Sandra. Also on Friday, the first 50,000 fans in attendance will receive a letter of dedication, written by Scully. Vin Scully Appreciation Day will be capped off by Friday Night Fireworks set to the top calls of the Hall of Famer’s career. 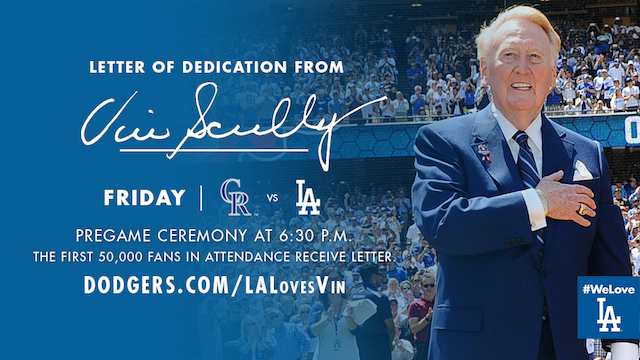 On Saturday, the first 50,000 fans in attendance will receive a 39-millimeter solid bronze Scully limited-edition commemorative coin. It’s minted with an image of Scully with his signature greeting quote on the front and the Dodgers’ established date on the back. 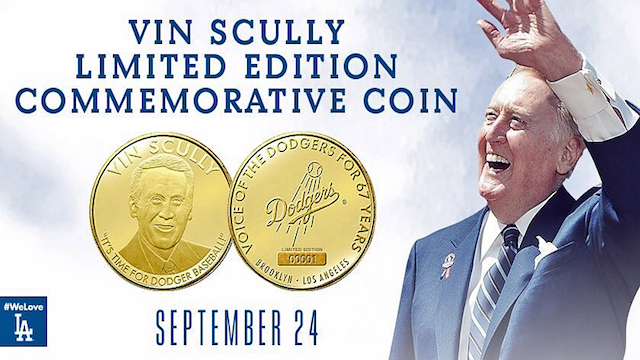 Each coin is packaged in a protective flip pouch with a certificate, and will be individually numbered. The final memento to collect over the weekend is the commemorative edition of Dodger Insider magazine that celebrates the life and career of Scully. 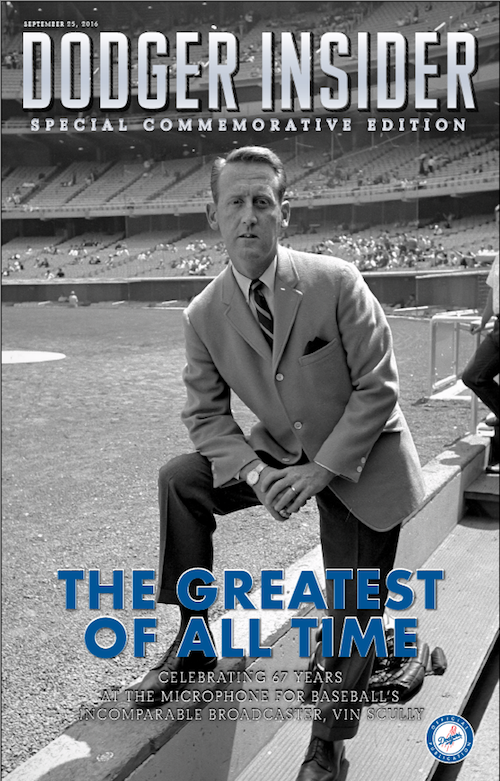 Scully also graced the Sept. 19-24 issue of Dodger Insider magazine. KTLA will carry each game during Vin Scully Weekend, and also the final three games of his career when the Dodgers face the San Francisco Giants at AT&T Park.

Friday’s ceremony in honor of Scully will be broadcast live on AM 570 KLAC and televised on KTLA, SportsNetLA and on SportsNetLA’s Spanish-language telecast.