After a relatively quiet offseason, the Los Angeles Dodgers made a splash by agreeing to acquire Mookie Betts and David Price as part of a three-team trade with the Boston Red Sox and Minnesota Twins.

However, that hit a snag when the Red Sox raised issue with the medicals of former Twins pitching prospect Brusdar Graterol. Despite efforts by the Red Sox and Twins to overcome the hurdle, the three-team trade came undone.

In its place, the Dodgers completed separate deals with the Red Sox and Twins. Ultimately, they not only added Betts and Price, but Graterol as well. The blockbuster trade was celebrated by FOCO with the release of the first officially licensed bobblehead to feature Betts in a Dodgers uniform.

“Mookie Betts is one of baseball’s top talents, having won Gold Glove, Silver Slugger and batting title awards, so it’s no surprise that Dodgers fans are excited to have him as part of their team,” said Matthew Katz, senior licensing manager at FOCO. 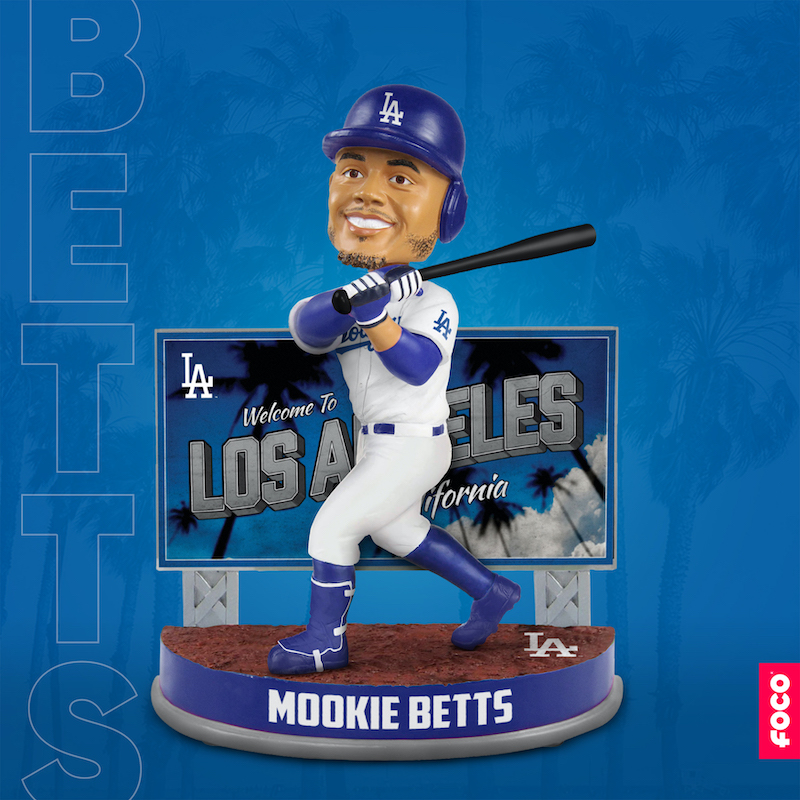 “This blockbuster trade happening just one week prior to the start of spring training has the baseball world buzzing, and FOCO knew it had to add to the buzz with this officially licensed Mookie Betts Los Angeles Dodgers bobblehead.”

The bobblehead features Betts swinging a bat in front of a billboard that reads, “Welcome to Los Angeles, California.”

This bobblehead is hand painted and stands approximately eight inches tall, making it the ideal addition to any collection at home, or any desk at work or school. It is available for pre-order now and has an expected delivery date of June 1.

A quiet start to the offseason ended up being a hectic one for the Los Angeles Dodgers,…