Coming off releases of several Los Angeles Dodgers bobbleheads, FOCO now has made a Dodger Dog version available, with units limited to 600 in production. The Dodger Dog bobblehead went on sale Tuesday morning and is due to ship at a later date.

The bobblehead features a Dodger Dog themed for the Fourth of July and waving a United States of America flag with a replica of the Dodger Stadium video board behind it. Most of the previous bobblehead releases by FOCO have sold out in a matter of minutes.

Much of those focused on celebrating the Dodgers winning last year’s World Series, as fans were given the chance to purchase bobbleheads of Mookie Betts, Clayton Kershaw, Corey Seager and Justin Turner, among others. Also made available was a World Series pins collector’s set.

FOCO now is offering individual pins for purchase, along with swimwear for the summer and a Don Sutton bobblehead, among other memorabilia.

The Dodger Dog has been a hot topic this season as the team switched away from Farmer John as the distributor. The Dodgers have since announced Dodger Dogs are now supplied by Papa Cantella’s. 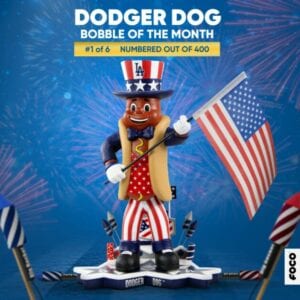 With Dodger Stadium now open to full capacity, the Dodgers set a promotions and giveaway calendar for the 2021 season, which includes 10 bobblehead dates. Next of which is a Cody Bellinger bobblehead that will be distributed on Thursday.

@DodgerBlue1958
568 Following
24K Followers
Rick Monday and @LAJohnHartung beginning the #DodgersAllAccess panels. https://t.co/K8hh11p5tu
about 1 hour ago
Mookie Betts and Walker Buehler were among those to praise #Dodgers fans for bringing the intensity.… https://t.co/LHJbjLteyt
3 hours ago
Follow

One night after being shut out for just the fourth time this season, the Los Angeles…