After ringing in the new season with a package of memorabilia and collectables centered around baseball’s top pitchers, Sports Crate this month is focusing on catchers. Los Angeles Dodgers backstop Yasmani Grandal is among those featured in the “Behind The Dish” theme for June.

Only four years old, the company has plans to expand to offer crates for all 30 MLB teams and eventually delve into other sports.

Sports Crate offers two bundles: a $39.99 monthly subscription that doesn’t come with any commitment, or a Season Pass for $179.99. A Season Pass includes five months of Sports Crate shipments and can be prepaid upfront for a discount and special edition figure.

Each crate is valued at a minimum of $80, and is comprised of a minimum of five team-specific items, including authentic limited merchandise. The complete contents of each crate are not revealed to preserve an element of surprise. 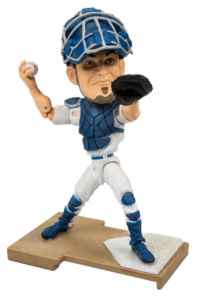 DodgerBlue.com received the “Bring The Heat” bundle, which came with a Clayton Kershaw figurine, Dodgers t-shirt, mini corn hole game that coincidentally had Grandal’s image on it, and other items.

Although the Los Angeles Dodgers expressed their interest in re-signing Trea Turner,…

The annual MLB Winter Meetings begin on Sunday in San Diego, Calif. and the Los Angeles…