Los Angeles Dodgers catcher Yasmani Grandal has joined forces with relief organization Food for the Hungry on the “Striking Out Poverty” project that that aims to end poverty in El Mirador, which is one of the Dominican Republic’s most poverty-stricken communities.

Also involved in the initiative is Athletes Brand, who is outfitting MLB players with limited edition ‘KPoverty’ t-shirts that are available in team-specific colors. From now until the All-Star break, players from several teams will wear their designated shirt for two-week stretches.

Grandal, along with Miami Marlins second baseman Dee Gordon and players from the Philadelphia Phillies, among others, began to wear their shirts on Wednesday.

Sales of the shirts go towards funding a $95,580 goal to feed the El Mirador community, improving their water structure, education system, and baseball fields.

In January, a Striking Out Poverty contingent visited the Dominican Republic to gain an understanding of what improvements were needed. The group met with community leaders and families during the trip.

Shirts can be purchased at AthletesBrand.com. For more information on the relief campaign and to contribute, visit strikingoutpoverty.com. Use the #KPoverty hashtag to join the conversation on social media platforms throughout the campaign. 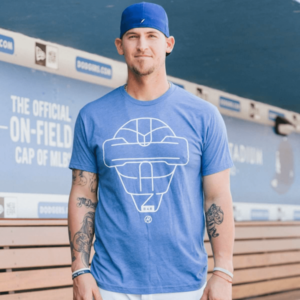 In addition to his current work with the organizations, Grandal also partnered with Athletes Brand on a “Shirt for a Cause,” which is a limited-edition t-shirt campaign that helps athletes raise money and awareness for a charity or foundation of their choice.

Grandal’s shirt is available beginning Monday, June 19, and proceeds during the two-week campaign will go to the Leukemia & Lymphoma Foundation.

“We wanted to figure out a way to not only help (a close family friend), but others that have been diagnosed with Leukemia or Lymphoma,” Grandal said.

“It’s one of those things where you can do so much to help out a friend, but you can do a little bit more to help out not only her, but the rest of the population that is being affected by this cancer.”

The Los Angeles Dodgers hired Dontrelle Willis as a special assistant, which the former…

Prior to re-signing Justin Turner to a two-year contract, the Los Angeles Dodgers…