In addition to unveiling a 2021 promotions and giveaway calendar, the Los Angeles Dodgers also announced five theme nights (special ticket packages). All but one of the contests is after Reopening Day on June 15, when Dodger Stadium will expand to full capacity.

The Dodgers have 35 home dates with a giveaway or promotion, including 10 bobblehead dates. First up is a Justin Turner bobblehead on June 15, when the Dodgers host the Philadelphia Phillies. The first 25,000 ticketed fans in attendance will receive the bobblehead.

However, this weekend also marks the first themed game at Dodger Stadium, with the team celebrating LGBTQ+ Pride Night. The series opener against the Texas Rangers also sees the return of Friday Night Fireworks.

Each of the five theme nights at Dodger Stadium comes with a special giveaway that is only obtainable when purchasing the designated ticket pack.

Sharon-Franklin Brown (L.A. Pride Board President), Rev. Troy Perry (founder, Metropolitan Community Church) and frontline healthcare workers will be recognized during pregame ceremonies and the national anthem will be performed by VINCINT. A pregame party in the right field plaza bar starts at 5:30 p.m. PT.

Fans that purchase the special event ticket pack will receive a Dodgers/Pride t-shirt.

Complete information has not yet been announced, but fans that purchase the special ticket pack will receive a Dodgers/Mexican Heritage Night jersey. 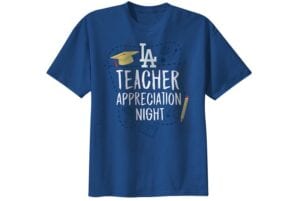 While full details are to follow, the Dodgers have already unveiled the special t-shirt that comes with purchase of a ticket pack to Teacher Appreciation Night. 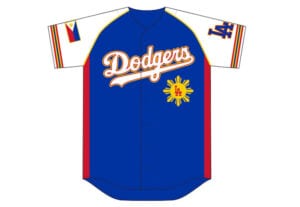 Details of pregame ceremonies and celebrations will be announced at a later date, but purchase of a ticket pack comes with a themed Dodgers jersey.

The special item with purchase of a designated ticket pack has not yet been announced.

@DodgerBlue1958
567 Following
26K Followers
More bad news for the #Dodgers and Joe Kelly. https://t.co/AtmI87qCR5 https://t.co/BCpallKT5K
about 1 hour ago
"He was throwing 95 mph in the fifth inning, so I don't think it was being tired. I think that they had a very good… https://t.co/EL19dpTlGU
2 hours ago
Follow