2020 World Series: Twitter Map Shows Most Of Country Is Rooting For Rays To Beat Dodgers

For the third time in the last four years, the Los Angeles Dodgers reached the World Series, where they are taking on the TampaBay Rays.

The Dodgers’ journey to this point certainly hasn’t been easy as they overcame a 3-1 deficit to defeat the Atlanta Braves in the National League Championship Series.

The Rays faced similar adversity in the American League Championship Series. They jumped out to a 3-0 lead on the Houston Astros before dropping the next three. They got back on track with a Game 7 win to punch their ticket to the Fall Classic.

As it currently stands, the Dodgers have a 2-1 lead on the Rays and are two wins away from their first World Series win since 1988.

It appears most of the United States is rooting against that as evidence in data compiled by Betonline.ag. 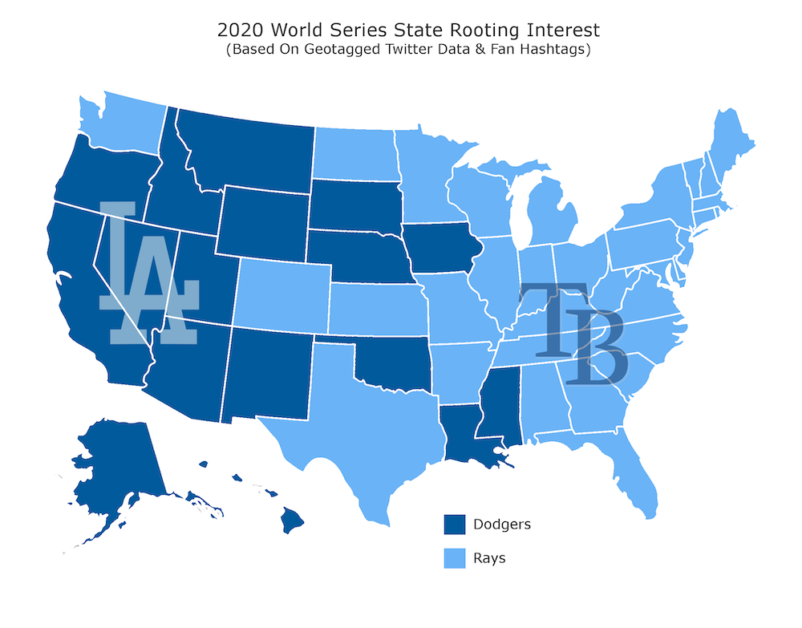 It’s no secret there are plenty of fanbases that don’t like the Dodgers, whether it be other teams in the NL West that have had to watch them win the division each of the last eight years, or East Coast teams that are closer to Tampa Bay.

One other aspect of it could be the payrolls as this series is David Vs. Goliath in that sense. The Dodgers have the second-highest payroll in baseball at $105.5 million while the Rays rank 27th at $28.6 million.

This World Series is also extra special for Dodgers president of baseball operations Andrew Friedman, who previously served as the general manager of the Rays.

“I’ve been trying to process it,” he said. “Obviously, watched the end of their game Saturday and saw they were advancing on. At that point it was just pure happiness for them. We still had a lot of work to do, so all of my energy and attention was on Game 7.

“It kind of hit me [Tuesday] waking up and processing all the text messages and questions about it, it’s definitely surreal. Some of my best friends in life are there. We joked when I left the team that we were going to meet up in the World Series one day. For it to actually happen is surreal.”

Have you subscribed to our YouTube channel? It’s the best way to watch player interviews, exclusive coverage from events and more!

The Los Angeles Dodgers hired Dontrelle Willis as a special assistant, which the former…

Prior to re-signing Justin Turner to a two-year contract, the Los Angeles Dodgers…