Clayton Kershaw, Justin Turner Provide For Those In Need At The Dream Center’s Back To School Bash

Still unable to provide his usual dominance on the mound for the Los Angeles Dodgers because of a back injury, Clayton Kershaw did his part to give back to the community Saturday morning at The Dream Center’s annual “Back To School Bash.”

The event began at 10 a.m. PT, though some families began lining up well before sunrise in Los Angeles. More than 2,000 backpacks filled with various school supplies and healthcare items, such as a toothbrush, were distributed to children in need.

Kershaw’s Challenge, the charity established by Clayton and his wife Ellen, has previously collaborated with The Dream Center on multiple events.

“It just seemed like a perfect fit for us,” Kershaw said of his search to find a local area non-profit organization to align with.

“It’s two miles away from Dodger Stadium and it’s just a perfect fit having us here to be able to help the kids.” The feeling is reciprocated by the volunteer-driven organization that has several locations throughout the continental United States. 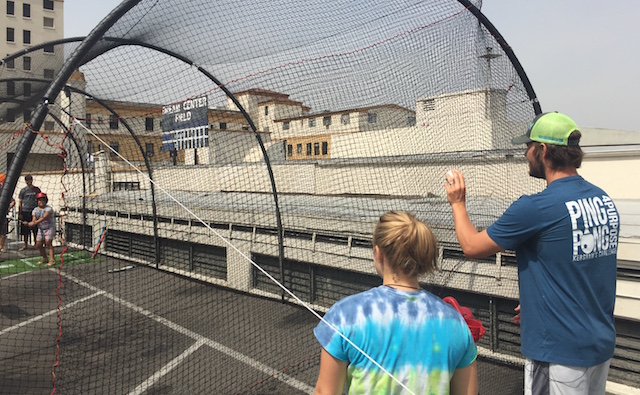 “We are gracious for our partnership with Kershaw’s challenge,” said Clint Carlton, Director of Public Relations for The Dream Center. “Both of our mission statements line up identically and it’s an honor to serve the Los Angeles community with them.”

Kershaw was joined by musician Jordin Sparks, and teammate Justin Turner who also has a strong relationship with The Dream Center. “It’s about providing the kids with basic needs for school. You take little things for granted like backpacks, paper and pencils,” Turner said.

“You think it’s not that big of a deal but when you hand off the bags, you see how excited and happy the kids are, and how emotional and grateful the parents are. I think it leaves a lasting image on these families.”

Along with providing school supplies, families were able to take advantage of free haircuts and health screening, among other services. After children filed through the line to receive their backpack they were greeted by an array of games and activities.

Kershawn and Turner teamed up at the batting cages, with the former feeding balls into a pitching machine while the latter provided batting tips. “On top of the backpacks, I think the kids, excited as they are to get it, they also want to go inside and play some games and pet some animals. It’s a great event,” Turner said.

After some coaxing the Dodgers’ third baseman mustered up the courage to approach a large python that was part of the reptile exhibit for a quick photo-op, much to the delight of the crowd.

“We can’t say enough about Justin Turner,” Carlton said. “The impact he has made on the community in Los Angeles is amazing. He’s always willing to jump in and serve with us whether it be during the season or at Christmas.”