Russell Martin Happy To Show Dodgers Rookies That Veterans Can ‘Get Hot,’ Even If It Requires Begrudgingly Accepting Baby Powder Celebration

The Los Angeles Dodgers earned their MLB-leading 10th walk-off win and completed a sweep of the St. Louis Cardinals on Wednesday afternoon, but for the first time this season, the game-winning hit was delivered by a veteran in Russell Martin.

Joc Pederson delivered the Dodgers’ first walk-off win — on a home run in April to cap off Jackie Robinson Day — and in between he and Martin, Alex Verdugo (twice), Will Smith (twice), Matt Beaty, Cody Bellinger (twice) and Max Muncy have sent the Dodgers celebrating on the field.

“A lot of walk-offs come from young guys,” Martin said after his chopper up the middle carried through and scored two runs. “The old guys need to kind of sharpen up. Me and [Muncy] hit our last two, I think. Yeah, let the old guys get hot, too, you know?”

Martin’s reference was of course related to Verdugo inspiring a ‘Don’t let the kid get hot!’ celebratory saying as his early-season play provided a spark.

While Martin joined his younger teammates in playing the role of hero, he was mindful of good fortune being on his side. He stepped into the batter’s box with runners on first and second and the Dodgers down to their final out.

The first pitch he saw from Cardinals closer Carlos Martinez went straight to backstop, leaving the tying and winning runs in scoring position. “It went from, ‘OK, I don’t have to drive this ball,’ to put it in play and make something happen that way; especially when you get two strikes and a guy is throwing 100 mph,” Martin said of the sequence. 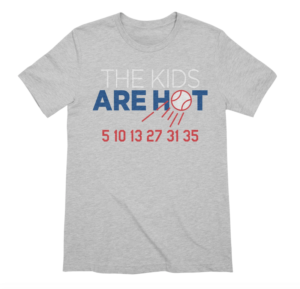 “If you can kind of just shorten up and try to touch the ball, let destiny happen. It was one of those situations where I wasn’t really tying to do much except just put the ball in play. Just trying not to think, really. Just trying to see the ball and put a good swing on it.

“Got a pitch I could put in play, and really just put it in a good spot. It wasn’t hit that hard or anything; sometimes placement is what you need. This was one of those cases.”

As Will Smith slid across home plate, Martin began to peel off as he rounded second base and went into shallow field. A mob of teammates followed him, and soon after the customary ice bucket celebration — along with the new trend of baby powder as the topper.

“Baby powder is the worst,” Martin answered when asked if he had a preference. “The water kind of opens up your lungs, you take a deep breath, and then they throw the baby powder and you get dust in your mouth. It’s a really bad combo.

“I don’t know whoever started that, but I don’t like it.”