The 2023 Los Angeles Dodgers schedule begins at Dodger Stadium with an Opening Day matchup against the Arizona Diamondbacks on March 30 for the start of a four-game series. The Dodgers conclude the year with a seven-game road trip against the Colorado Rockies and San Francisco Giants.

The 2023 MLB season marks the first time all teams will play a balanced schedule since Interleague play was introduced in 1997. That amounts to the Dodgers only making two visits to opposing National League West cities and playing a total of 52 divisional games (down from 76). Each team will play 46 Interleague games, an increase from 20.

The Dodgers’ first Interleague game in 2023 is on May 15, for the start of a three-game series against the Minnesota Twins.

Other notable dates on the Dodgers 2023 schedule include hosting the Chicago Cubs at Dodger Stadium for Jackie Robinson Day on Saturday, April 15. The Dodgers also are at home on the Fourth of July, facing the Pittsburgh Pirates.

In terms of rivalries, the first matchup against the San Francisco Giants takes place at Oracle Park from April 10-12. Their first time facing the San Diego Padres also is on the road, May 5-7, at Petco Park. The New York Yankees visit Dodger Stadium for the first time since 2019 when they play a three-game series June 2-4.

The Dodgers and Tampa Bay Rays play May 26-28 at Tropicana Field in their first meeting since the 2020 World Series.

Like always, the Dodgers and Los Angeles Angels each host the Freeway Series — June 20-21 in Anaheim, and July 7-8 at Dodger Stadium.

As was the case with the 2022 season, the Dodgers are off the Sunday (July 9) before the All-Star Game. The Seattle Mariners are hosting the 2023 All-Star Game at T-Mobile Park on Tuesday, July 11.

Mookie Betts faces the Boston Red Sox for the first time since being traded, when the Dodgers visit Fenway Park from Aug. 25-27.

Start times for games on the 2023 Dodgers schedule have yet not been announced. The final day of the 2023 MLB regular season is Sunday, Oct. 1. Nor has the Dodger Stadium giveaways schedule. 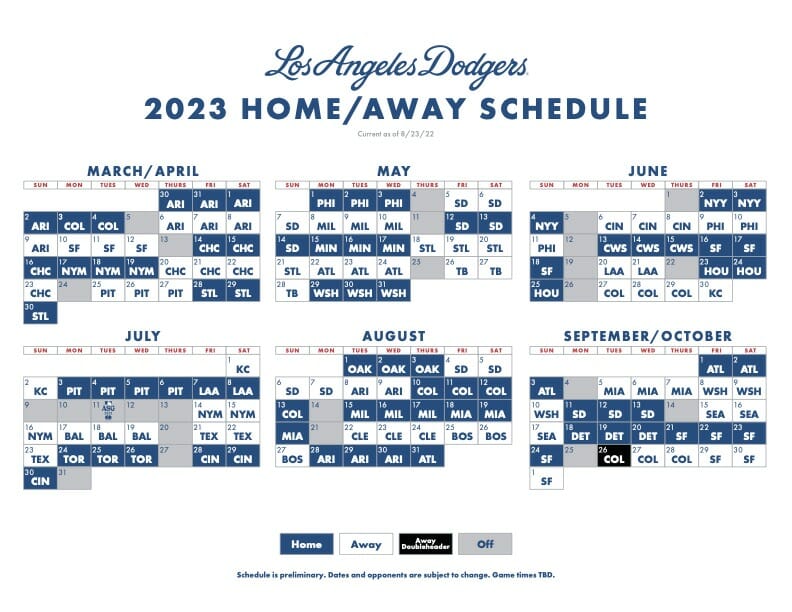 The first half of the 2023 Dodgers promotional and giveaways schedule includes dates for drone shows, Friday Night Fireworks, Vin Scully jersey and bobbleheads of Gavin Lux, Clayton Kershaw and more.

Have you subscribed to the Dodger Blue YouTube channel? Be sure to ring the notification bell to watch player interviews, participate in shows and giveaways, and stay up to date on all Dodgers news and rumors!