Despite failing to sweep the Chicago Cubs, Los Angeles Dodgers manager Dave Roberts said his team was hardly feeling any pressure and would return to Wrigley Field for Game 5 of the National League Championship Series with the same mindset and focus they’d held throughout the year.

Three innings into the game, it was evident the Dodgers were well on their way to reaching the World Series for the first time since 1988. Chris Taylor’s nine-pitch walk to lead off the first inning was cashed in two batters later on Cody Bellinger’s RBI double.

Kiké Hernandez ambushed the first pitch he saw from Jose Quintana to lead off the second inning with a home run. The homer was Hernandez’s first of his career in the postseason, and it marked the start of a memorable night.

In the third, not long after Justin Turner’s RBI single extended the Dodgers’ lead to 3-0, Hernandez drove the first pitch he saw from Hector Rondon to right-center field for a grand slam.

Hernandez joined Ron Cey (1977), Dusty Baker (1977) and James Loney (2008) as Dodgers who have hit a grand slam in the postseason. He later put himself in a category of his own by clubbing a home run off Mike Montgomery in the ninth inning.

Hernandez became the first Dodgers player to hit three homers in a postseason game and set an LCS record with seven RBI. 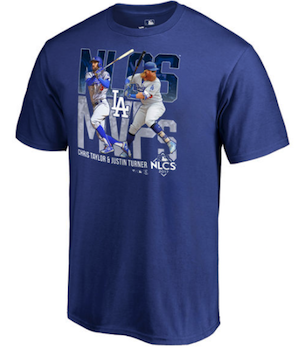 Provided with ample run support, Clayton Kershaw did not allow a hit until Kris Bryant’s solo home run with one out in the fourth inning. Kershaw held the Cubs to just the one run, three hits, and he recorded five strikeouts over six efficient innings.

The Dodgers finished with an 11-1 victory to eliminate the defending champions, and Chris Taylor and Justin Turner were named 2017 NLCS co-MVPs.

Major League Baseball's negotiations with the Players Association have been anything…

In what initially was viewed as a positive development, MLB commissioner Rob Manfred…