In addition to a wide range of food options at Dodger Stadium, including the heralded return of tacos, the 2019 season also brought about a new creation from the partnership between the Los Angeles Dodgers and Golden Road Brewing.

Brewed with Bravo and Cascade hops, the finished result is a crisp and smooth blonde ale that can be enjoyed by fans both inside and outside of Dodger Stadium. The Dodgers Blonde Ale (4.8%) is now available at Dodger Stadium and Golden Road pubs, and in 25oz cans at retailers across Los Angeles metro and Southern California.

Fans can visit Golden Road at their Anaheim and Los Angeles locations, with a pub opening in Huntington Beach this fall. For those who often visit Dodger Stadium throughout any give year, the Golden Road Brewing sign above the bar in left field is one you are likely familiar with.

The bar, located across from King’s Hawaiian Grill at Dodger Stadium, offers several Golden Road craft beers to pair with BBQ fare, a Dodger Dog, or any of the new Beyond Meat options. 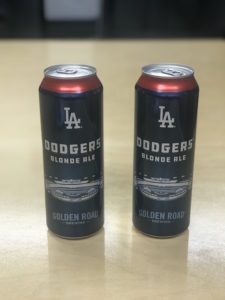 Founded in 2011, Golden Road grew to be the largest producer of craft beer in Los Angeles. After rapid growth and remarkable success, Golden Road Brewing sold to Anheuser Busch in September 2015.

DodgerBlue.com would like to remind to please drink responsibly and 21+.

@DodgerBlue1958
567 Following
26K Followers
You don't cheer for the Braves, but instead root for the Astros to lose. https://t.co/HT8emLkFv8
about 1 hour ago
Show the Astros more of that Joctober magic. https://t.co/HPYOX2uLWm
2 hours ago
Follow

Although the matchup is not yet in place, the 2021 World Series schedule and start…

The Los Angeles Dodgers never seemed to have much of an answer for Eddie Rosario, and…