Los Angeles Dodgers bobbleheads are among the most popular items each season on the team’s giveaways calendar for Dodger Stadium, but for fans unable to attend home games, FOCO has a wide range of offerings as well.

One of the latest Dodgers bobbleheads by FOCO is a version of brand ambassador Max Muncy. He’s set to a “Funky Muncy” theme and dressed in the Dodgers City Connect uniform.

The Muncy bobblehead also features an “LA” chain and he’s mid-swing in a batter’s box with the Dodger Stadium video board with “Funky Muncy” text to serve as the background to the base. The latest iteration is similar to a “Hollywood Hills” bobblehead that FOCO launched in 2020.

That was to celebrate the All-Star Game at Dodger Stadium, which ultimately was delayed until this season. 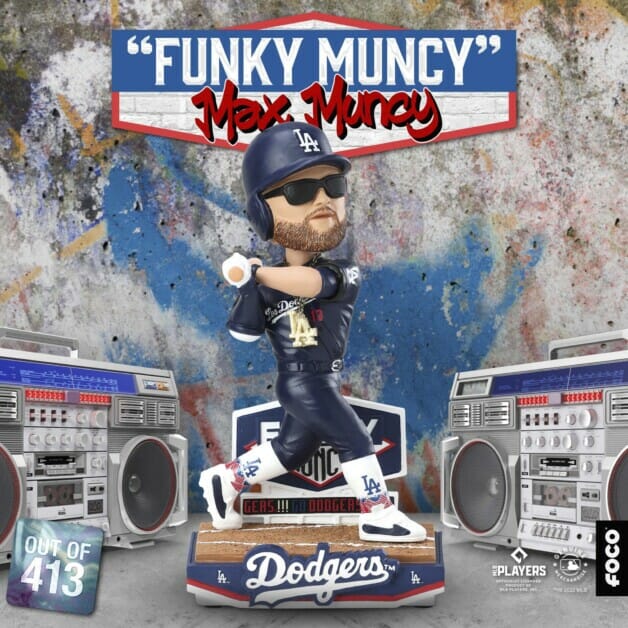 The newest Muncy bobblehead is limited to 413 in quantity and will not be restocked once sold out.

Although Muncy has yet to meet expectations this season, Dodgers manager Dave Roberts remains confident in him and will continue to provide regular opportunities.

“I think in his work, in batting practice, I see it really consistent, really good. He’s in a good headspace,” Roberts said. “I think that we were certainly hoping for more production from when he came back, but there’s still a lot of baseball left.

“So I’m counting on him. I’m still going to continue to give Max leash. I believe in him.”

Have you subscribed to the Dodger Blue YouTube channel? Be sure to ring the notification bell to watch player interviews, participate in shows and giveaways, and stay up to date on all Dodgers news and rumors!