FOCO released a limited-edition Max Scherzer bobblehead to celebrate his recent achievement of reaching 3,000 career strikeouts. The right-hander became the 19th pitcher in MLB history to reach the milestone.

The mini bobblehead scene, which features Scherzer in uniforms for the Arizona Diamondbacks, Detroit Tigers, Washington Nationals and Los Angeles Dodgers, is numbered out of 300. A prior Dodgers bobblehead release by FOCO after the trade immediately sold out.

So too did a version of Scherzer and several other players in the Dodgers’ Nike Connect Uniform.

As for his 3,000 strikeouts, Scherzer was proud for what it meant in terms of durability throughout his career. 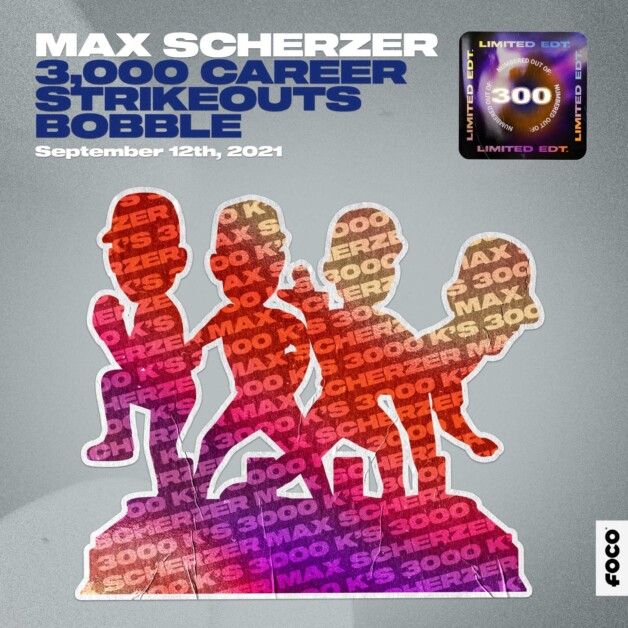 “I love strikeouts and to me, this is a testament to durability, going out there and making my 30-plus starts year in and year out. Everybody can have the ability to do this but few have the durability to do it. That’s what I take away from this, that it’s all the hard work I’ve put in to be able to have this moment.

“That’s what feels good. You just want to thank everybody along the way. You reach a milestone like this, you get to reflecting on all the coaches and catchers that helped you. I’ve had tremendous people around me, so I just want to give thanks to them as well.”

Since being traded to the Dodgers, the team has won all nine of Scherzer’s starts and he individually is 7-0 with a 0.78 ERA, 0.66 WHIP, 79 strikeouts and .150 batting average against.

Trea Turner, who of course has long been teammates with Scherzer, called this the best stretch he’s ever seen from the 37-year-old.

@DodgerBlue1958
570 Following
27K Followers
Thanks. Hate it https://t.co/U9WGsvbfDV
9 hours ago
Retweet to join us in wishing the great @TheVinScully a happy birthday! https://t.co/byRMauijxS
10 hours ago
Follow