The Los Angeles Dodgers pulled off the biggest acquisition at the MLB trade deadline this season by acquiring Max Scherzer and Trea Turner from the Washington Nationals, which is being celebrated with a limited release of bobbleheads by FOCO.

Both bobbleheads are numbered out of 221 and expected to ship at a later date. The release comes ahead of Scherzer’s Dodgers debut on Wednesday night against the Houston Astros.

The two-game series is the Astros’ second visit to Dodger Stadium since their World Series cheating scandal was uncovered, but first with fans in attendance.

It’s unclear when Turner will be able to join the Dodgers as he remains in MLB’s COVID protocol. That requires him to remain in isolation at least 10 days from the point of a positive test, which was July 27. 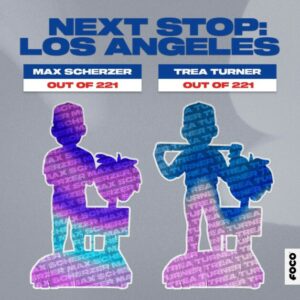 Dodgers manager Dave Roberts said he was hopeful to have Turner with the team this weekend, but that didn’t necessarily mean the All-Star would be on the active roster just yet.

Whenever Turner is cleared to play, he is presumed to slot in at second base. However, Dodgers president of baseball operations Andrew Friedman and Roberts have both said a decision won’t be made until speaking to Turner in person.

In addition to bobbleheads for Scherzer and Turner, also available from FOCO is a Max Muncy version that he specially designed and features his dog Jax.

Muncy previously was part of FOCO bobblehead designs to celebrate the ultimately-cancelled 2020 MLB All-Star Game, and last year’s World Series win. And of course there was a Dodgers bobblehead of Muncy that recaptured his telling Madison Bumgarner to, “Go get it out of the ocean.”

Lastly, FOCO released a new Dodger Dog bobblehead that celebrates the summer months and getting out in the Pacific Ocean. 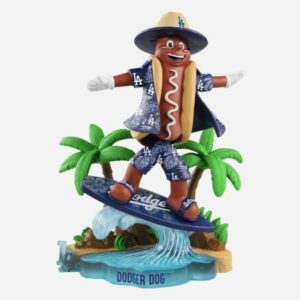 @DodgerBlue1958
568 Following
25K Followers
One way Kenley Jansen rebounded from last season was changing things mentally. https://t.co/UzHjMySoo3 https://t.co/li0GmIrKH5
58 minutes ago
Max Muncy hit another home run and Trea Turner's speed was a big factor. #Dodgers highlights:… https://t.co/gtbyaNTd1j
about 1 hour ago
"At the same time, we know there's still a lot of work ahead of us and a lot to be accomplished."… https://t.co/xqpxGm6QTW
2 hours ago
Follow

Everyone knows about the physical toll it takes to succeed as a professional athlete,…