The Los Angeles Dodgers hosted a luncheon to unveil and provide samples of new food items Jason Tingley, executive chef for Dodger Stadium, will make available during the 2016 season.

With twists on traditional food items and exotic dishes growing in popularity, Dodger Stadium has done its share over recent years to provide fans with outside-the-box options. Among the six additions to menu are a Kobe beef burger, buffalo chicken wings and a chicken sandwich for those in search of a healthier option.

The price points for the various food items has not yet been established, but their availability will not be limited to premium seating areas.

Although extreme popular, what’s not becoming a fixture on the menu at Dodger Stadium is the Cuban Dog, complete with ham, pork, Swiss cheese, mustard and pickle.

Tingley is well aware of its popularity, but pointed to the preparation process and vast space needed to make the hot dog as reason it can’t become a regular item.

However, expect the Cuban Dog, as well as themed items based on which road team is visiting Dodger Stadium, to pop up throughout the season. Arguably the most popular dish amongst those in attendance were the smoked BBQ wings, which will be sold in a bundle (15 wings). It includes French fries, carrots, celery sticks and two soft drinks.

The wings are smoked using hickory wood and topped with a proprietary sauce. “I can’t tell you,” Tingley responded when asked what ingredients are in the sauce. “It’s very well reduced compared to other barbecue sauces.” He did reveal honey and vinegar are mixed in to help complete the overall flavor. The bundle will be available for purchase at Think Blue BBQ: 251.

If the wings were the headliner, the Gouda Kobe Burger wasn’t a lackluster opening act. While traditional burgers have long been available, the newest concoction serves as a welcomed variant. 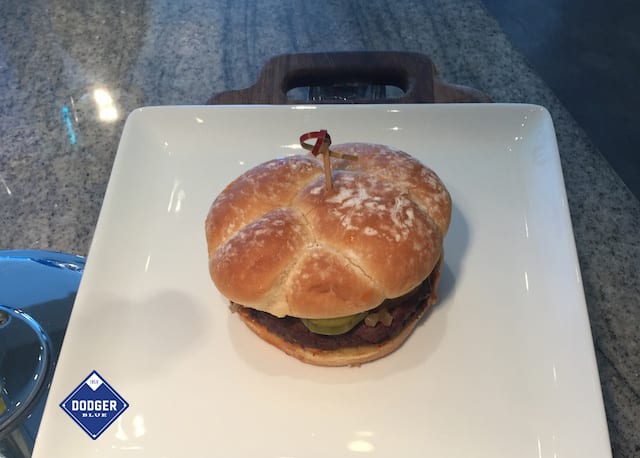 Tingley added he may tinker with the burger at various points throughout the season. For instance, adding barbecue brisket as a topper and selling it at Think Blue BBQ, or with pastrami and selling it at Dodger Stadium deli locations.

A lighter take on the carne asada nachos, and much different than “traditional” nachos that come with salsa and cheese, the Specialty Nachos Verde are a tasty alternative. 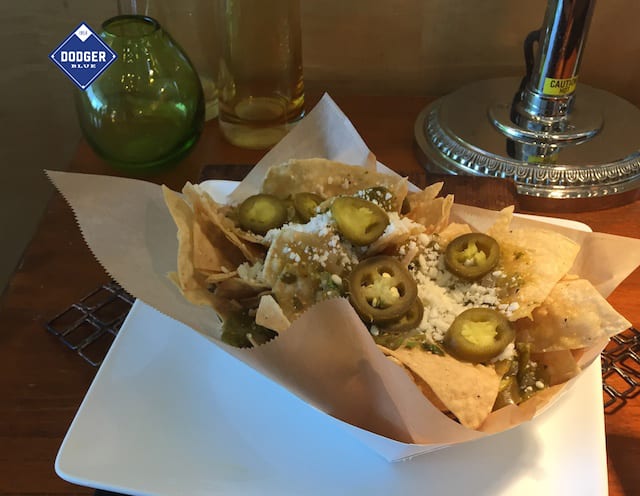 Crispy tortilla chips are topped with tomatillo verde sauce, pickled jalapeños and Cotija cheese. Some jalapeños may pack more of a kick than others, but spiciness isn’t much of an issue here.

Having established a sponsorship King’s Hawaiian, the famous and ever popular roll serves as the bun for a new loaded hot dog. 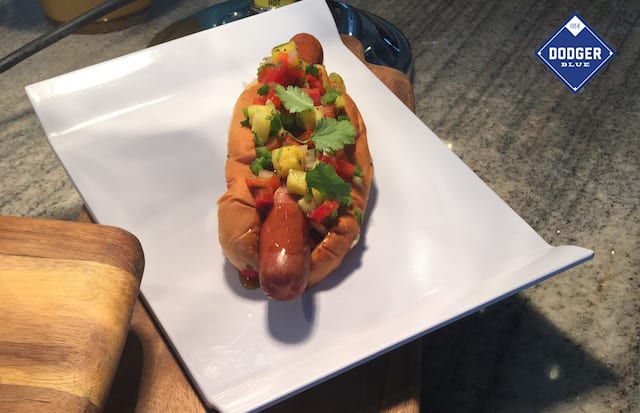 The all-beef quarter-pound hot dog is topped off with a pineapple salsa, and will be available at Extreme Loaded Dogs: 248, 421, 736. On top of introducing a new hot dog, Tingley added a Shock Top Bratwurst to the menu. 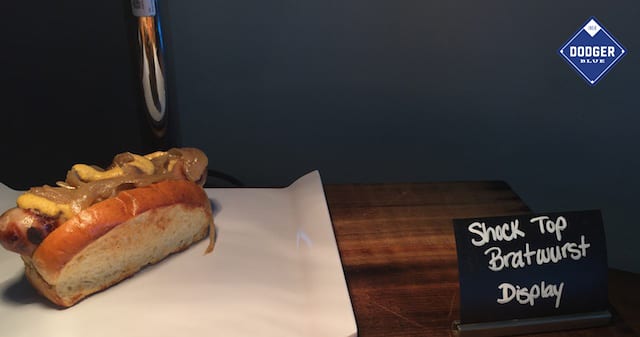 As one would suspect, the spicy pork bratwurst link is infused with Shock Top beer. It’s served on a buttered and grilled lobster roll with caramelized onions and spicy brown mustard. The bratwurst will only be available in the grill area of Think Blue BBQ 251.

Last, but certainly not least, the Chicken Verde Sandwich is for those with a lite meal in mind. A grilled chicken breast is served on telera bread with jalapeno aioli, lettuce, tomato and tomatillo verde sauce. 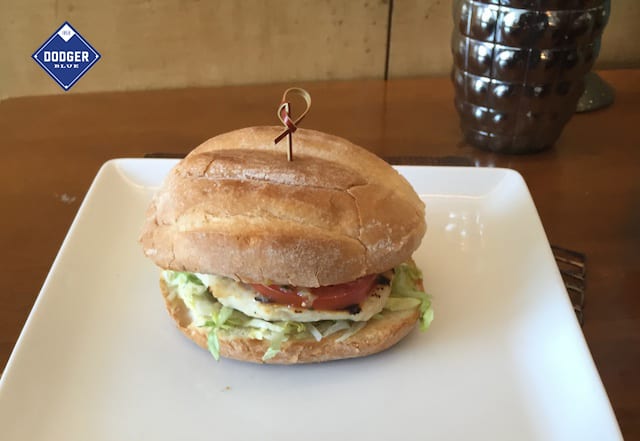 @DodgerBlue1958
570 Following
27K Followers
Thanks. Hate it https://t.co/U9WGsvbfDV
8 hours ago
Retweet to join us in wishing the great @TheVinScully a happy birthday! https://t.co/byRMauijxS
9 hours ago
Follow