The Los Angeles Dodgers announced Lonzo Ball, selected No. 2 overall in the 2017 NBA Draft by the Lakers, will throw out the ceremonial first pitch prior to Friday’s series opener against the Colorado Rockies.

That will extend what’s been a whirlwind for Ball, as the local product will return to Los Angeles one night after being on hand with other lottery selections at Barclays Center in Brooklyn for the draft.

What’s more, prior to making his way to Dodger Stadium, the UCLA product will be formally introduced at the Lakers practice facility in El Segundo.

Ball is not the first member of the Lakers organization to throw out the first pitch at Chavez Ravine, which has proven to be an extremely pro-Lakers crowd despite the team’s struggles.

Lakers head coach Luke Walton, last year’s No. 2 overall pick Brandon Ingram and Metta World Peace, among others, have all had the honor of taking the mound.

The two storied franchises will be intertwined again on Wednesday, Aug. 16, when the Dodgers hold their annual Lakers Night. A special ticket package that includes a co-branded t-shirt is available for that evening’s game. 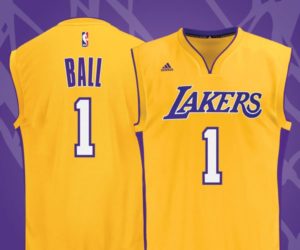 The Dodgers have not yet announced who will be throwing out the first pitch for that game, but it’s presumed another Lakers representative will be on hand.