With the Los Angeles Dodgers set to embark on a seventh consecutive postseason run, Clayton Kershaw and Skechers announced a multi-year partnership that will have him appear in global marketing campaigns for the brand’s men’s performance and athletic lifestyle footwear launching in 2020.

Kershaw is also collaborating with Skechers on an array of styles and recently debuted a custom exclusive baseball cleat. Skechers is based in Manhattan Beach, Calif., which is an added benefit and natural connection for Kershaw in his new endorsement deal.

“I’ve been working with the design team on several styles, and I am extremely impressed with the performance and comfort offered by Skechers. We have some unexpected and exciting ideas that fans will love.”

Kershaw’s cleats include his No. 22 and “CCC” on the heel, representative of his two children — Cali and Charley. Kershaw and his wife Ellen are expecting a son in January. 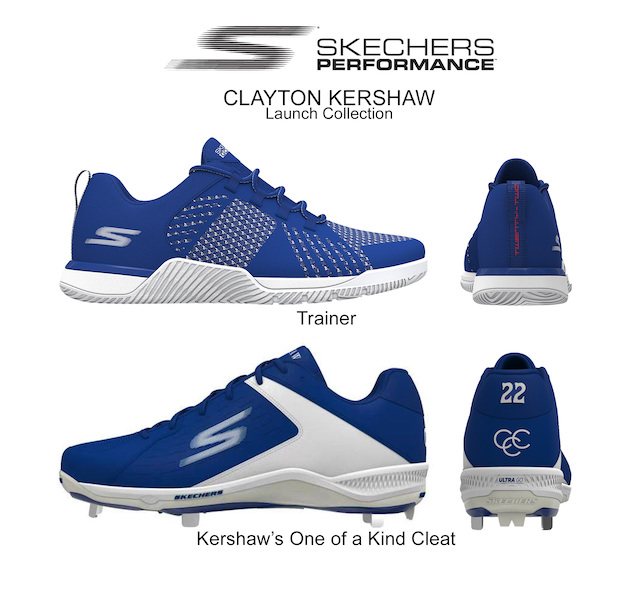 “If you get to design a cleat, you try to make it a little more personal,” Kershaw said. “My daughter and son, Cali and Charley are both named with “C’s” and our third son due in January will likely be named with a “C.” I thought it would be a cool element to add them to the mix.”

The design process also served as a bit of an eye-opener for the notoriously regimented pitcher. “I’ve been wearing the same cleats for basically my whole career and didn’t think I was super high-maintenance or stubborn about what I wore, but when it came time to pick a different brand, I realized I was,” Kershaw said.

“I just could not find the right match. I kept trying different shoes and it wasn’t working out.
Skechers came along and said we can do this for you. I thought let’s give it a shot and sure enough they showed up. I tried them on, and they fit great – super comfortable. Even gave them a baseball test, started throwing in them and running around in them, and I was thoroughly impressed by that.”

Skechers president Michael Greenberg added: “We are fortunate to have Clayton Kershaw, one of the best pitchers in baseball today, wearing Skechers. Clayton proves that the comfort and performance of Skechers footwear delivers even when you’re at the top of your game.

“Fans have already seen Skechers on the mound in the middle of the action, and we’ll soon follow with a full marketing campaign supporting our performance and athletic lifestyle men’s collections. Clayton’s energy, talent, and international fanbase make this partnership a home run for Skechers for years to come.”

As the start of the postseason draws closer, the Los Angeles Dodgers have the luxury of…

The Los Angeles Dodgers are playing some of their best baseball, winning five straight…

With the start of the postseason just around the corner, the Los Angeles Dodgers are in…