Dodger Stadium has long been seen as a jewel of the greater Los Angeles metropolis and one of the best stadiums in Major League Baseball.

Home of the Los Angeles Dodgers since 1962, the stadium has maintained several elements of its initial iconic design while undergoing several renovations in the five-plus decades of its existence.

Now, as the third-oldest active MLB stadium, Dodger Stadium undergoes another facelift before hosting the 2020 MLB All-Star Game, just the second All-Star Game that it has ever served as the backdrop for.

Below is a complete history and timeline, through July 2019, of previous and active renovations at Dodger Stadium.

1958: Los Angeles taxpayers pass a referendum on building a baseball stadium in Chavez Ravine, paving the way for then-Brooklyn Dodgers owner Walter O’Malley to reach an agreement with the city on plans for a stadium to host his team.

1962: Dodger Stadium opens, housing both the Dodgers and expansion Los Angeles Angels, who move to Anaheim in 1965. 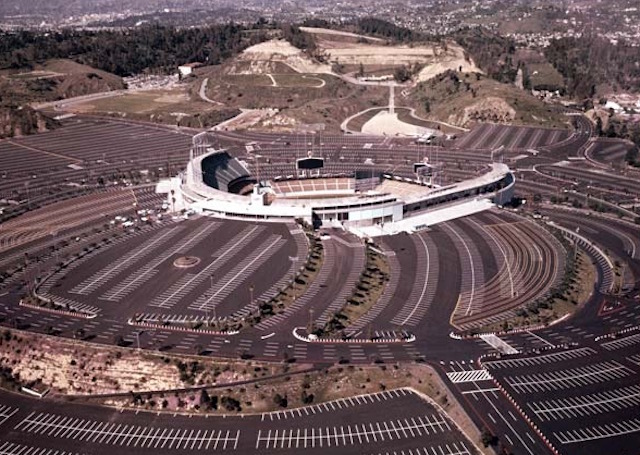 2005: Seating in Dodger Stadium is overhauled under owner Frank McCourt, with color scheme returning to that of original 1962 seats. Field-level seating along foul lines converted to retro-style box seats.

2008: Planned $412 million renovations announced to include plaza with restaurants beyond center field, pedestrian access from the bottom of Chavez Ravine to Top of the Park. The renovations are never completed due to the eventual bankruptcy of the McCourt ownership.

2015-16: Upgrades include more standing area in the top deck and more memorabilia on display throughout the stadium.

2017: Additional renovations and additions include a statue of Jackie Robinson near the left field reserve entrance, new premium seating in the field level, more memorabilia on display, more food options and concession stands and remodeled club and suite areas for bigger groups.