After going 5-5 on their longest road trip of the season, the Los Angeles Dodgers begin their final homestand of 2016 with a key series against the rival San Francisco Giants. Los Angeles enters play with a five-game lead in the National League West.

Their magic number to clinch a fourth straight division title is down to any combination of nine Dodgers wins or Giants losses. Both teams aligned their respective starting rotation so that the front-end would take the ball throughout the three-game set.

On Monday, that means Clayton Kershaw and Madison Bumgarner get to do battle. The start is just Kershaw’s third since coming off the disabled list.

He was sharp in his previous outing, allowing just one hit and collective five strikeouts over five shutout innings. Kershaw this season is 2-0 with a 2.35 ERA in three starts against the Giants.

Bumgarner is winless thus far against the Dodgers in 2016, going 0-2 with a 5.63 ERA in three starts. However, he didn’t express any concern over a lack of success following his loss on Aug. 23. Bumgarner allowed a season-high five earned runs and was removed after just five innings pitched.

Los Angeles has won both Kershaw-Bumgarner duels this season, with their left-handed ace earning the victory in one of the two games.

Monday is ‘Clippers Night’ at Dodger Stadium, which should make for an interesting setting considering Chavez Ravine has been quite vocal over their preference for the Los Angeles Lakers. Dodgers offered a special ticket package that included a co-branded cap: 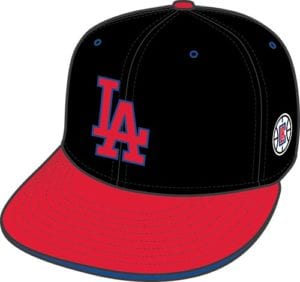 Tuesday’s game is a rematch between Rich Hill and Johnny Cueto. Hill faced the Giants on Aug. 24 in his Dodgers debut, throwing six shutout innings to earn the win in the club’s 1-0 victory.

The lone run Cueto allowed was on a solo shot hit by Justin Turner. The right-hander is 2-1 with a 3.18 ERA in four starts against the Dodgers this season, including a 1-1 mark and 1.35 ERA at Dodger Stadium.

The first 40,000 fans in attendance on Tuesday will receive a Vin Scully bobblehead:

The series concludes Wednesday with Kenta Maeda and Matt Moore slated to take the mound. The game will be nationally televised on ESPN2 without local blackouts.

Brandon Ingram, Los Angeles Lakers rookie and No. 2 overall pick in the 2016 NBA Draft, will throw out the ceremonial first pitch. Lakers head coach Luke Walton and former Lakers forward Metta World Peace previously had the honor of doing so this season.

Maeda is 2-0 with a 3.00 ERA in two starts against the Giants. Moore twice faced the Dodgers while he was with the Tampa Bay Rays, and made a third start after being traded to the Giants.

He nearly threw a no-hitter at Dodger Stadium on Aug. 25, losing it on Corey Seager’s flare single into right field with two outs in the ninth inning. Moore is 2-1 with a 3.20 ERA in three starts against the Dodgers.

Though, he’s allowed just one unearned run in the two recent outings (combined 15.1 innings). Dodgers are offering a travel mug in honor of Law Enforcement Appreciation Night. The ticket package can be purchased at dodgers.com/lawenforcement.

A Dodger Insider magazine with Vin Scully on the cover, will be available for the first six games of the homestand (Sept. 19-24): 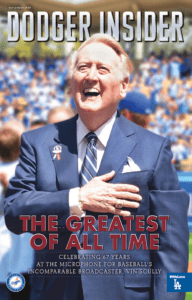 A commemorative Dodger Insider magazine will then be available Sunday to the first 50,000 fans in attendance: 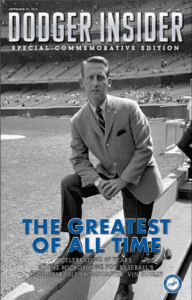 *with Dodgers only
**with Giants only