DRESS LIKE THE PLAYERS IN OUR EXCLUSIVE ‘WORLD SERIES ATTITUDE’ SHIRT

Fans will have the opportunity to download a Kenley Jansen, Clayton Kershaw or Justin Turner or Crypto token in what’s the first Crypto giveaway in Major League Baseball, and believed to be the first of its kind in all of sports.

“We hope this piques the interest of Dodger fans, and will help launch a new age of digital collectibles and promotions.” 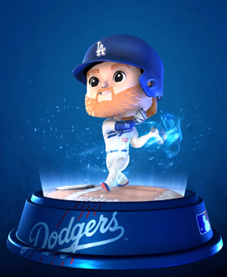 While supplies last at ticketed fans’ point of entry, the first 40,000 in attendance will receive a card with a unique code and directions to a website where a digital bobblehead can be unlocked and added to their Ethereum wallet.

The player Crypto token received by fans will be randomly selected. There is approximately an equal number of Kershaw, Turner and Jansen codes distributed at Dodger Stadium gates.

In addition to the new-age giveaway, the Dodgers have an Orel Hershiser bobblehead and several special ticket packages remaining for their home games.