The Los Angeles Dodgers will face the Arizona Diamondbacks at Dodger Stadium on Thursday, March 28, 2019, for Opening Day of the 2019 regular season. It marks the earliest start date for all clubs (excluding openers abroad) in MLB history.

GET THE EXCLUSIVE #DONTLOOKATME SHIRT NOW

This is Dodgers’ fourth Opening Day matchup against the Diamondbacks, and the first since 2014. Los Angeles is unbeaten in its three previous Opening Day games against Arizona, picking up wins in 1999 at Dodger Stadium, 2003 at then-Bank One Ballpark, and in 2014 in Sydney, Australia.

The Dodgers open the season with a seven-game homestand, as a four-game series against the Diamondbacks is followed by three games with the San Francisco Giants. Then Los Angeles hits the road for seven games, comprised of series with the Colorado Rockies and St. Louis Cardinals.

They conclude the 2019 regular season with a six-game road trip against the San Diego Padres and Giants.

The Dodgers’ longest road trip next season is eight games; done from May 17-26 and June 3-11. Their longest homestand is 11 games, with nine- and 10-game stretches also at Dodger Stadium.

After playing eight games on the road, the Dodgers have a grueling stretch of 18 games in as many days from June 13-30. Included in that is road series with the Diamondbacks and Rockies.

Per usual, the Dodgers will spend Jackie Robinson Day at home (Monday, April 15). Next season it’s for the start of a three-game set against the Cincinnati Reds.

Dodger Stadium will play host to games throughout the summer holidays, with home games set for Mother’s Day (May 12 vs. Washington Nationals), Memorial Day (May 27 vs. New York Mets), Father’s Day (June 16 vs. Chicago Cubs), Independence Day (July 4 vs. Padres) and Labor Day (Sept. 2 vs. Rockies).

Since the Dodgers moved from Brooklyn in 1958, they’ve seen the Yankees for eight regular-season games and 11 World Series games in Los Angeles. Next season’s matchup is a byproduct of the National League West drawing the American League East in Interleague play.

As such, the Dodgers’ first Interleague series is from May 21-22 at Tropicana Field for two games with the Tampa Bay Rays. Also of note is a series against the Boston Red Sox at Fenway Park from July 12-14.

The series is the Dodgers’ first out of the All-Star break. It marks the third-ever regular-season trip to Fenway Park, and the first since June 2010.

The annual Freeway Series will first be played at Anaheim, on June 10 and 11. The Angels then visit Dodger Stadium for games on July 23 and 24.

Other Interleague series include an August matchup with the Toronto Blue Jays, a three-game set against the Baltimore Orioles at Camden Yards in September, and hosting the Rays later that month. 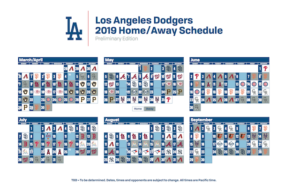 The Los Angeles Dodgers have jumped out to a 2-0 start in Cactus League play, picking…

The Los Angeles Dodgers did not sign Trevor Bauer to impress during Spring Training,…