When Vin Scully announced his intention to retire after last season it set in motion plans for the Los Angeles Dodgers to honor their legendary broadcaster throughout the year. That began prior to Opening Day of 2016, with the renaming of a portion of Elysian Park Avenue being renamed to Vin Scully Avenue.

Scully, appreciative and humbled by the gesture, asked that he not be the focal point of the 2016 season. Although business did carry on for the Dodgers, Scully’s forthcoming retirement remained on the minds of many.

He was visited in his booth at Dodger Stadium by opposing players and managers, all of whom bestowed Scully with various gifts and mementos. The Dodgers did their part by staging Vin Scully Appreciation Day and Vin Scully Weekend during his final homestand.

During that time, Dodgers controlling owner Mark Walter said the club would add Scully to the “ring of honor” that displays retired jersey numbers at Dodger Stadium. That’s scheduled to take place on Wednesday, May 3, when the Dodgers host the San Francisco Giants.

The pregame ceremony will coincide with the first 40,000 fans in attendance receiving a Vin Scully commemorative microphone giveaway, which the Dodgers unveiled on Friday: 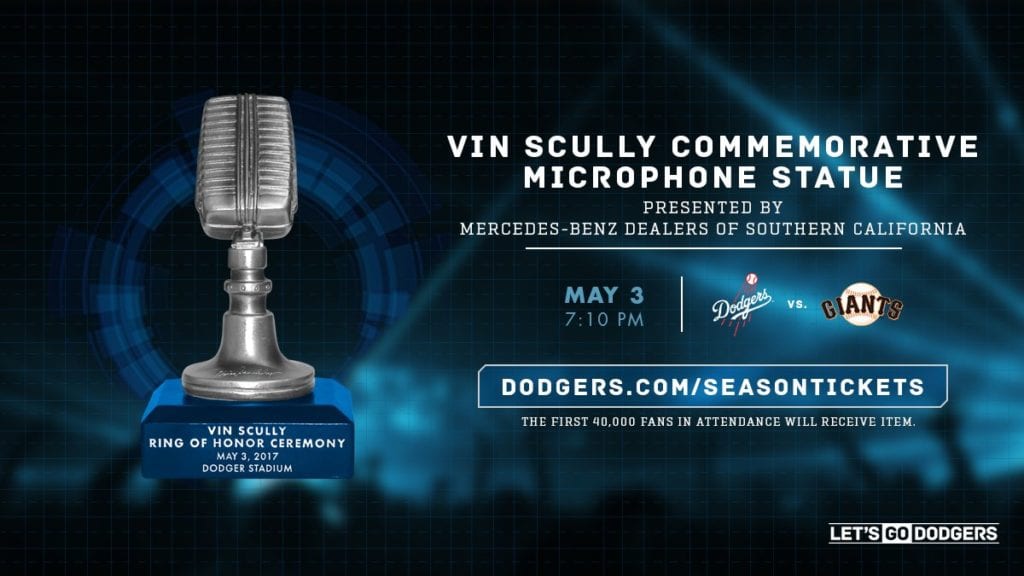 Since retiring, Scully has been awarded the Presidential Medal of Freedom and was named the Sports Illustrated 2016 Media Person of the Year.