The Los Angeles Dodgers clinched their seventh consecutive National League West with a win against the Baltimore Orioles on Tuesday and with that announced a Cody Bellinger bobblehead giveaway at Dodger Stadium for their first NL Division Series home game.

The special edition bobblehead depicts Bellinger in his home run trot and will be available in both a home white Dodgers uniform and road grays. The first 40,000 fans in attendance will receive the white or gray version of the bobblehead depending on what is available at their point of entry.

Bellinger is in the midst of an MVP-caliber season, which if he wins, will be the first Dodgers position player to take home the hardware since Kirk Gibson in 1988. Of course, that was also the last time the Dodgers won a World Series. 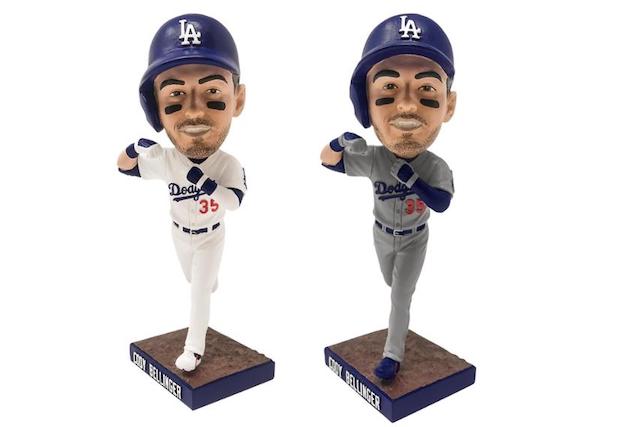 The Bellinger bobblehead coming in October is a second the Dodgers are making available this season. The first was depicted of his walk-off hit against the Milwaukee Brewers in Game 4 of the 2018 NL Championship Series.

In addition to the bobblehead for their first home game, the Dodgers will distribute rally towels at each postseason game played at Dodger Stadium this year.

Based on the current standings, the Dodgers would host the Wild Card winner in Game 1 of the NLDS on Thursday, Oct. 3. At present time, the Washington Nationals are slated to face the Chicago Cubs in the Wild Card matchup.

Fans are encouraged to visit Dodgers.com/Postseason for the latest ticket information. Additionally, those that purchase a full season ticket membership for the 2020 season will be granted full postseason rights for this year, including the World Series.

@DodgerBlue1958
558 Following
23K Followers
Clayton Kershaw came to the defense of Max Scherzer after Joe Girardi asked for a third check.… https://t.co/anooQyDKy1
52 minutes ago
Nate Jones cleared waivers but decided to leave the #Dodgers organization rather than go to the Minors.… https://t.co/gVAHW2gqlg
about 1 hour ago
"I just hope the process is kind of an open door process and it's not set in stone.” https://t.co/5oPSpyihha https://t.co/EA1kKlqfQl
2 hours ago
Follow

If there's anything to know about Los Angeles Dodgers pitcher Trevor Bauer, it's that…