While former Los Angeles Dodgers first baseman Adrian Gonzalez is looking to extend his on-field career into 2019, he’s long been hard at work toward setting himself up for life in retirement.

Gonzalez is one of the founding members of PopFly XP, an all-encompassing app that aims to provide fans with updates on their favorite player, exclusive merchandise and create an organic connection between the parties.

It’s the brainchild that of a group that includes founder and CEO Jesse Nuñez, founder and CMO Luis Zuno, founder and CAO Pascual Aranalde, and founder and CCO Josué Elguezabal. Gonzalez and Nuñez began to lay the foundation for the app during a lunch at Republique.

In addition to being recognized as one of the platform’s five founders, Gonzalez holds an official title of chief player development officer. The five members spent a year working on the app, which was unveiled during a private event held at the Los Angeles Athletic Club.

Within the PopFly XP umbrella, the app will house dedicated channels for participating players. The names will be symbolic of a player’s identity, brand and preferences. Naturally, Gonzalez has opted to carry forward with the “TITAN23” moniker.

“Bring fans closer to their favorite player. We know fans love their teams, they love their players,” Aranalde said of the app’s focus. “This is more a personal kind of thing between fans and the player.” 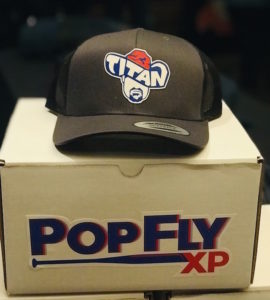 Zuno added: “The whole idea is you see players more and more sharing their personal life. You see a lot of players showing things that five years ago was unthinkable. It’s an app for the players by the players.”

While Nuñez, Zuno and Aranalde helped carry out the business development of the app, Gonzalez was instrumental to sharing insight from a player’s perspective.

“The thing the app allows you to do is you can take the three social media components (Facebook, Instagram, Twitter) and put them all in one,” Gonzalez told DodgerBlue.com. “So you don’t have to be specific to one or the other. You might have a certain amount of followers on Instagram that you don’t have on Twitter, or vice versa.

“This is all into one. The second thing I would say is there’s limitations in every social media component, where the app does not have any limitations; video length, picture quality, picture style and all these other things.”

Additional layers to the app that will either be available come launch in the spring or via updates include augmented reality and stat tracking.

“Over the last couple years, [social media’s] been a big part of a movement that hasn’t really been looked into from a baseball perspective,” Gonzalez said.

“I think it’s a missing link in baseball that we can jump on and try to push. Because, one, the fan wants to know more about the player. And two, the player wants to be a little more organic and authentic with the fans. This is a way for both of those things to get accomplished.”

Julio Urias has struggled in the first inning of most, if not all his starts for the…