The 2020 Los Angeles Dodgers World Series ring was presented to players and coaches during a touching pregame ceremony at Dodger Stadium that many said was a perfect closing to their championship season.

“The Dodgers incredible 2020 season resulted in what can only be described as one of the most unique and unforgettable World Series in MLB history, and we are honored to have been trusted to be the Official Jeweler of the Los Angeles Dodgers and celebrate their World Series victory,” said vice president and chief operating officer of Jostens Professional Sports Division Chris Poitras.

“The Dodgers organization has an incredibly rich championship history and to be a part of that is truly a privilege. This ring celebrates the Dodgers relentless determination and success that ultimately lead to their 2020 World Series win.” 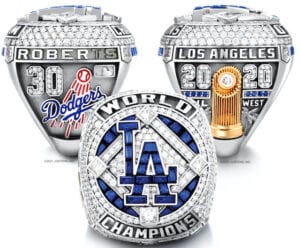 The ring top features the Dodgers’ “LA” logo that is crafted from 17 custom-cut genuine sapphires and set atop a baseball diamond. Within the basepaths are 16 pavé-set diamonds and accenting first, second and third base along with home plate are individual princess-cut diamonds.

“For 32 years Los Angeles waited for this moment, this team and this ring – and all that it represents,” Dodgers president and CEO Stan Kasten said. “Jostens did a spectacular job designing these rings which represent the sacrifice, determination and fortitude demonstrated by our players, coaches and entire organization to win a championship while overcoming unprecedented challenges.

“We are so proud of this team and thrilled to have presented them with their rings today in front of the best fans in baseball.”

The interior of the baseball diamond is filled by an additional 29 diamonds to represent the number of home runs the Dodgers hit while playing in the postseason bubble at Globe Life Field.

Combined on both edges are 12 princess-cut sapphires, representative of the 12 home runs hit by the Dodgers during the 2020 World Series.

The left side of the ring features the recipient’s name above their uniform number, set in diamonds. In the center is a red and blue ceramic Dodgers logo and the Major League Baseball logo.

A yellow gold Commissioner’s Trophy –- accented with a single diamond –- highlights the right side of the ring. The championship year date is set with 36 diamonds and underlined by a total of eight round sapphires, symbolic of the eight consecutive NL West division titles won by the Dodgers from 2013-20.

The inside of the ring is personalized with the players’ signature and also features a blue enamel “LA” logo along with the Dodgers’ postseason series results.

The Dodgers’ and Jostens’ attention to detail extended beyond the actual piece of fine jewelry as the ring box featured a video screen that played highlights from last season. Will Smith had yet to see that prior to his postgame interview on Friday, but it was not lost on Justin Turner.

“I haven’t got to watch the entire thing yet, but that’s something that I’ll probably sit down tonight when I get home and watch the whole thing. Probably a couple times,” Turner said.

Have you subscribed to the Dodger Blue YouTube channel? It’s the best way to watch player interviews, participate in our shows and giveaways, and more!

@DodgerBlue1958
570 Following
27K Followers
MLBPA sent out a guide with key info in the event of a lockout. https://t.co/fZw9Ul4PKF https://t.co/Xri2n8L04X
54 minutes ago
Justin Turner will continue to talk free agency with Kenley Jansen and/or Joe Kelly if they wish.… https://t.co/nHJBN6kArR
about 1 hour ago
Expectation remains it'll be #Dodgers or Rangers for Clayton Kershaw if he continues playing.… https://t.co/tw1PyKu1pV
2 hours ago
Follow